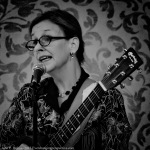 As usual, click on any picture and then cycle through them in a larger format in the gallery view.

Last night we had some entertainment provided by Tracy Eldridge, a guitarist and vocalist, and Mookie Siegel who played the accordion and piano and sang.  They played a number of German tunes, polkas, and autumn favorites.

It provided me another opportunity to try my lenses, etc. in the Omni Room here in Homewood at Plum Creek.  As usual the lighting was terrible and Tracy spent most of her time in a dark area while Mookie was in a brighter area.  Most of the pictures were taken at an ISO of 6400 but I did use three different lenses.  I decided to try showing them in B&W since I have more control over the images using the Silver Efex Pro software.

Based on a few images taken with the 27 mm f/2.8 lens, I am thinking that I would like to try the 35 mm f/1.4 lens.  I might be able to get better pictures even though I would need to do a lot of cropping  or sit on the floor up closer.  I also expect that I would be better off limiting my ISO to 3200 and under exposing the images and then increasing the exposure using LR5 rather than the camera.  These are things for me to try at a later date.

I’m sorry for the number of pictures, but I am busy and don’t have much time to work on them in the coming four or five days so consider these a “quick-look”.  I may work on the images and pare the number down at a later date.