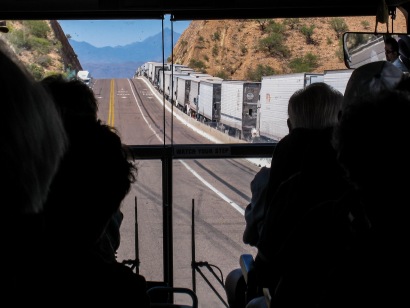 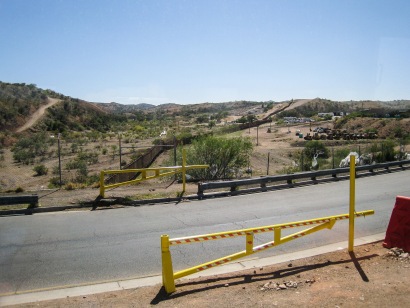 I have been reworking some older pictures that I made in the past with the thought that I might print some of them for my wall.  These aren’t ones I’m considering printing, but they made me wonder about the changes that might occur under the current administration.  I took these pictures in 2008 with a Canon PowerShot SD800 IS camera.  They show the line-up of trucks bringing goods into the U.S. while they are waiting to get cleared through the border on the Mexican side of the border.  You can see the wall in the second picture.  If those trucks stop coming we are going to either find that some goods aren’t available for purchase here or that they will cost us a lot more.  I noticed that many of the trucks were hauling fresh produce grown in massive greenhouses, etc. in Mexico.  I should have counted them.  There were two lanes of trucks stopped along several miles of road.

Primarily, I have noticed that a simple old P&S camera took some plenty sufficient pictures, even through the windows of a bus.