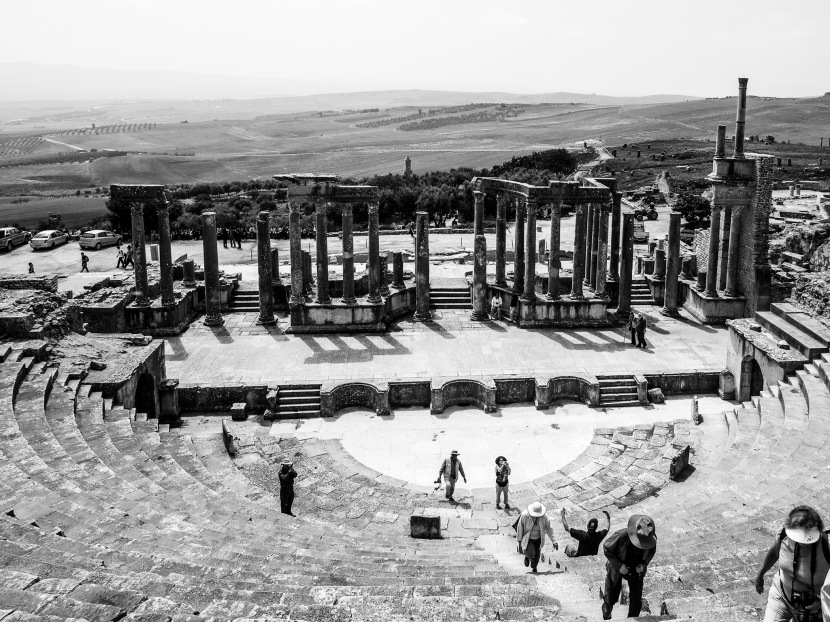 There has been some chatter on the web about reworking older pictures, so I thought I might have another look.  I took this picture in Tunisia in 2010, the year before we moved to Homewood, with an Olympus E-P1 and the 14-42mm kit zoom lens.  I only have jpeg files from which I converted this one to B&W.  I really liked that old camera.  With good light and a better lens it could still be making good images.  The key is good light, low ISO, and f/9 (in this case).

Look close, and several of you should recognize someone.  I remember how quickly I went up those steps to get this picture, as well as how high and steep those steps were.  I could never go that fast now.

This theater must have been great when it was built and used by the Romans.  It had a great view and captured the breezes nicely.

My real reason for going back through some old pictures was that I was looking at images I had made with micro 4/3 cameras and different lenses.  I have been thinking about a backup camera and have wondered about whether an older used one might work good enough.  I doubt I really need a backup camera so I tended to look at some of the smaller, more range-finder like cameras and general purpose zoom lenses as well as prime lenses that I had used in the past.  I really don’t want to get back to having more cameras and lenses then I need so I’m going slow as I think this through.